I drove by the new house the other day and took a few snapshots. 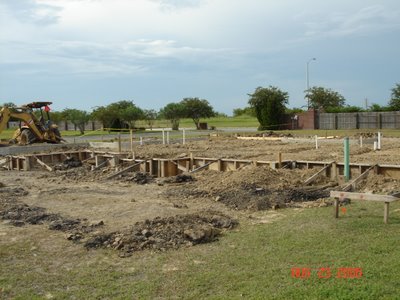 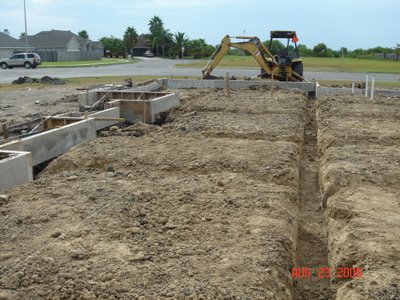 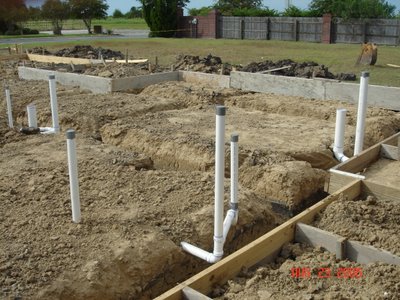 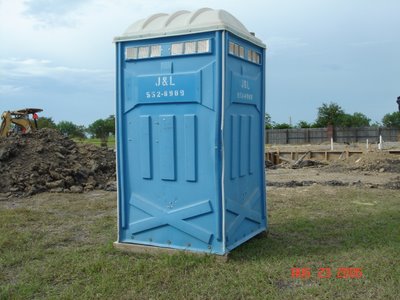 Sometimes we forget the very person we most wanted to become when we were children...when the soul was simple and simply for God.
Posted by Helen Chen at 9:21 PM No comments: 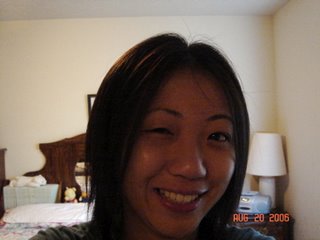 There was a mosquito in mom's room. It was so bad that I had to move out of her room. It was a little mosquito and anyone who's dealth with mosquito infestations know that the little ones are the most cunning ones. I was bitten twiice on the bottom of my foot, once on my ankle, once on my eyelid, and once on the palm of my right hand. Needless to say, one of my eyes looked as if someone's punched it. Finally, I gave up and moved out of my mom's room to mine. But periodically, there were bursts of "HELENA!! I hear it. I'm going to lay still...You come in and swat at it!" Of course after each of the outbursts, I ran back in her room, turned on the lights ,and swatted at small black moving dots abover her head. At 2 AM, the battle ended. Mom and I sat on her bed looking at each other. I was scratching the bottonm of my foot looking at her with one good eye, the other had been rendered usless by now. Her hair's all crinkled and messy. Mom bent over laughing. I made a face, stumbled back into my room, fell forward in a mound of disarrayed sheets, and passed out.
Posted by Helen Chen at 10:55 PM 1 comment: 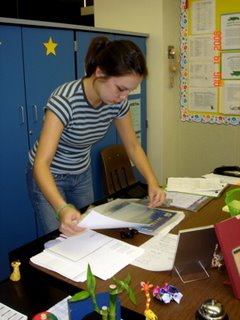 Ms. Steel at her desk 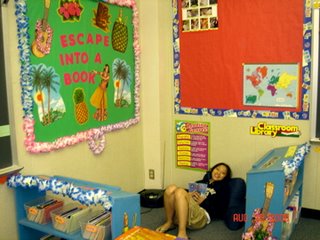 I'm reading in the cubby area.

I helped Katherine decorate and organize her new classroom this past Saturday. It was really nice. There's 18 desks for her 18 kids. In the top right corner, there's a reading cubbing area decorated in Hawaiian style. She left her mark with giraffe decors here and there. I haven't stepped in an elementary school in years. It was all very strange. There were posters with positive comments like "Do Your Best Today!", "Be Honest!", "Be Nice", "Be Helpful!". I couldnt help wonder if we all paid more attention to these little reminders when we were children, remembered them, and acted upon them grwoing up....we would all be better selves.
Posted by Helen Chen at 9:11 PM No comments:

Mike moved into the dorms today. My informant was a crying mom at around lunch time. I remember when I was dropped off ...August 1999 at the Madison House...I was literally dropped off. I didn't know my parents could drive off so fast. Then I found out that the cafeteria was not serving any meals for another three days. I lived off of the Christians On Campus welcome dinners (thank you sisters), Jason Avairah's candy bars, and the military food packs that my dad bought for me.
Posted by Helen Chen at 11:52 AM No comments:

I AM SO SORE FROM TENNIS. SO SORE!

It's official. Sunny's parents' house is now a neighborhood bar. Every aunties and uncles have come for drinks. And yes, there were underage drinking. Johnny Wu had to be driven home to Jason...intoxicated.

We are now more than half way done with the Grey Goose vodka bottle. I'm eagerly awaiting for it to be emptied so that I can use it for a vase...or to hold my stars!!
Posted by Helen Chen at 11:37 AM 1 comment:

Today was a rather odd day. A former coworker was arrested on the charges of strangulation of a woman in Victoria. He made the front page.

After work, Sunny and I drove to Austin. We stayed with Ken. The Houston crew wanted to go bowling after dinner. So we went to Highland Lanes. I did terrible as usual. THEN CHARELS threw up a little on Tammi.

There may be many different interpretations...Here's mine called...Through the eyes from yet another VICTIM:

Charles and I were talking about this pair of shorts Sunny accidently took back with him to PL. I thought it might have been his. When all of a sudden Charles turned towards Tammi and burped real loud. He turned back to me and started talking to me like nothing happened, but I smelled something that reaked on his breath. I asked him what he brought back with him. I held my breath and pinched my nose. It was THAT bad. I was just about to offer him some gum when Tammi discovered that there was a little bit of vomit on the sleeve of her tshirt. Apparently, Charles had up chucked throw up along with his burp. How was I a victim along w/ Tammi? I had to smell his reaking vomit BREATH!!!
Posted by Helen Chen at 11:17 AM No comments:

Last weekend we deviated from our norm of playing in H-town and traveled to Austin. We did so much in so little time it was exausting, yet so fun.

We left Friday right after work and on the way I lost my voice from coughing and singing, haha. First stop was Rudy's BBQ, can't resist the extra moist brisket and the tasty cream of corn. Then it was to Highland Lanes for some bowling action and a few laughs. Burp! The rest of the night was spent at Einsteins playing video games.

Saturday started out with a quick brunch and then kayaking. Note to self, never go alone again! I almost didnt make it back. A big thanks to the people who towed me half way back, haha. Putt putt golf afterwards was just way too hot, we should have went home after kayaking and played putt putt at Austin Park and Pizza later on. Dinner was at Mikado's and it was freezing in there. Food was good though. Austin Park and Pizza needs to fix their arcade games, everything was broken, unplayable, sucky. Laser tag was fun, i shot alot of people, but apparently alot of people shot me as well. While others got in line for go karts we took off back to PL. I spent most of Sunday sleeping and relaxing. I don't know how the rest of pack survived Schlitterbahn on Sunday and then more activities on Monday. I was pooped!
Posted by Sunny at 11:07 PM 2 comments:

Got my Bags all packed and I'm ready to go...

Got my bags all packed and I'm ready to go... love that Song.

I am ready to move into our new house. I already have boxes!
Posted by Helen Chen at 9:54 AM No comments:

Living in a predominately Taiwanese neighborhood.

Living in a predominately Taiwanese neighborhood sucks. I will make sure we have good locks on our doors to keep out the busy bees. And there are A LOT of them.

We played tennis yesterday. I was playing with Grace and was very impressed on how much she progressed with just a little bit of instruction when an odious woman approached us. Within minutes, she has insulted Grace and changed my tennis partner. She first asked me if I was payed to play with Grace. NO. I play with Grace, not because she is a good player, but because she is good company. By then, I couldn't help making faces...I think my face turned red. She said proudly that she is so and so's mom. I shrugged and told her that I don't know her or her daughters. Impatiently, she goes on to tell me that she had been on vacation in California for the past 4 weeks. She repeats 4 weeks several times and sticks up four fingers like I didn't really get that she is telling me her husband has been in Formosa for a long and probably is an important man. Who gives a crap! We are not at work. SHE DOESN'T EVEN WORK. Don't you hate it when women have to use the status of their husbands to appease their insecurities for being idle? So, her daughter comes on the court. I assume that it's ok that Grace hit with us. OH NO. She comes up to me and tells me...not in a lowered voice and with no shame. "Grace is not your level nor my daughter's level." She needs to just watch you hit with my daughter. That is when I deemed her as an odious woman. There are a lot here, but she tops the list.
Posted by Helen Chen at 1:32 PM 3 comments:

Check it out!! How do you like the color of the bricks? 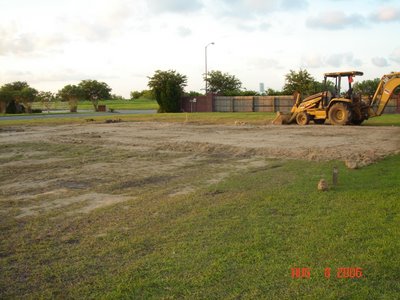 First off Happy Birthday to Helen and a belated one to Sam.

So this weekend Vanhdy apparently brainwashed Helen into thinking she was 26. Someone at work made a comment in regards to her being 25 now and she blurted out "I'M NOT 25!!! I'M 26!!!" hahaha. Then there was silence and then "STUPID VANHDY!!!" LOL.

Sam's dinner party took awhile to get started, but once it did everything went smoothly. I've never been to such a large party, practically took 1/3 of Cheesecake Factory. It was pretty entertaining watching him pull out "Navy" related gift one after another, haha. Later at After 5, Sam and Charles messed up their N'Sync routine. Charles didn't have enough alchy and Sam claimed he didnt know when to start dancing. Also I surprised myself with my alcohol tolerance. First time in many many many years since I took so many shots. Usually I turn really red and feel sick but this time I only turned red, no sick feeling at all!! Dunno what happened, but i'm not going to complain. =P What really messed me up was the lack of sleep that night.

For Helen's B-day we ate in and Andrews. Preparation for lunch started late because everyone was tired from dog piling Sam the night before. haha Good thing Helen showed up late due to traffic on 610. She was happy with all her gifts, even that duplicate Banana necklace which she went and bought herself that morning, heh sorry Jenny. Then came the big one. I must brag about it since it totally messed up my own plans on how I was going to spend the $$$
http://www.tagheuer.com/the-collection/aquaracer/woman/quartz-watch/index.lbl?w=WAF1412.BA0812
I kinda want one for myself now =P. The guys version of course.

Then remainder of the day was spent playing vball and driving home.
Posted by Sunny at 11:45 PM 2 comments: