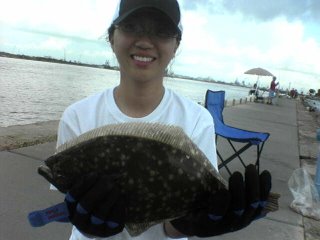 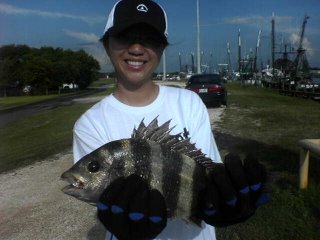 Since we been fishing so much lately... 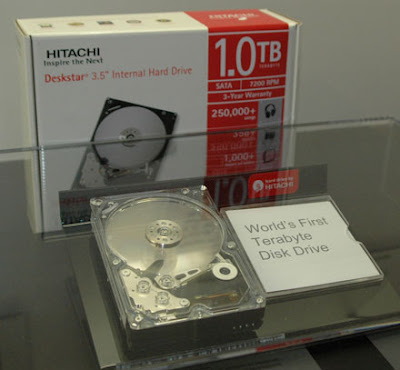 I wonder how long it'll take to defrag one of these?

How young do you look?

Last night a random fisherman rang our doorbell to try and sell us some fresh live shrimp. Helen went and opened the door and he asked, "Is your mom home?".
Posted by Sunny at 10:40 AM 2 comments:

A site for all you nds people.
http://www.simplynds.com/
Posted by Sunny at 10:35 AM No comments:

I found Helen's keys! I was getting worried there for a bit.
Posted by Sunny at 9:58 AM 1 comment:

It all started Friday night, as soon as everyone got here at 11pm we hit the gym and played vball, bball, and football til 2am. After a few games of assassin, we got the only night of real sleep only cause it was raining really hard and crabbing was cancelled in the morning. Around noon on Sat. it stopped raining and we took off to go fishing at the pier. Nothing but catfish and small croakers. After a light lunch we took off to Port O'Conner to try our luck fishing there. Different place, same results. At least there was more variety in our catches. Of course, CK manages to catch the ugliest and nastiest looking fish ever (toadfish). I'll have to post the picture later, but it looks like a pile of poo. Back at the house, the girls have already started preparing for the BBQ.

BBQ was crazy, we had Ken, our grill master outside grilling, and the girls in the kitchen preparing all sorts of food. All in all we had enough food to feed all 15 of us plus around 10 of Helen's co-workers +wives + their kiddos. In fact, there was so much leftovers that we didnt have to eat out the whole weekend. The co-workers little kids are another story, I think their shrieks gave me a semi headache. Cory and Gina brought over their Alaskan huskie, Mylie. She looks just the dogs in the movie, 8 Below. I think Helen wants one now. After a short rest Jason went and picked up a bunch of dodgeballs at Walmart. I have to admit after watching the movie a few years ago, I've been itching to play. I lasted only a few rounds before my shin splints got the worst of me. I sat out and watched them finish a best of 7 game series. It came down the the wire, very exciting. Lots of OOOOOs and AHHHHHHs and yelling and screaming. By the way, how in the world is Kin so good? Why is he so good? He must have been secretly practicing at IBM in Austin with his coworkers. After dodgeball some of us went back out to fish while others stayed at home.

Sunday we woke up bright and early and headed out crabbing. Crabs were plentiful and Jing finally caught some quality fishes. Two redfishes!! too bad they were too small to keep. Duffy didnt get hurt this time and CK didnt lose any chicken necks. He did catch a large green moldly crab which no one dared to eat. Lunch consists of last night's bbq and sausages and crabs. Douglass and Kelly did the dishes afterwards and I went to sleep. By the time I woke up Helen and Kelly already finished watching a movie and everyone was almost done playing poker. Dinner we managed to finished off the bbq from yesterday, then headed out to the gym again for some vball. When we got there it started pouring again, good thing the gym is indoors. CK took a nasty fall, which didnt help out his messed up toe nail. I did give him some tylenol for it, but it turns out it was 3 years expired, heh. It's still effective though! After vball, everyone left for Htown except Vanhdy and Jenny.
Ken, Kin, Jason, Annie, Helen, Jenny, Vanhdy, Cary and I finish the night fishing at Port O'conner till 6 in the morn. Nothing but freaking catfish, pigfish and small croakers. Next up, DEEP SEA FISHING!!!! Anyone up for it?

PS> Anyone happen to find a set of Honda Keys? It has a big pink heart attached to it. It seems to be missing. Also Duffy's black Astro's hat is missing as well. It wasn't in the gym.
Posted by Sunny at 10:26 AM 1 comment: